Now surfing facebook, I see the news that the other 16-year-old youth was arrested for hacking the VOV network, I don’t know what the purpose of this action is, but first of all, you all understand this is a violation of the law. I don’t get into the press much, but I also have a few words to say to you, especially those under the age of 18. You can also call it a letter.

Summary of the case

On June 14, this young person read through some articles of VOV about Mrs. Nguyen Phuong Hang. Because this friend often watches Ms. Hang’s live, she also agrees with her point of view and supports Ms. Hang. Nothing will happen if it’s just pure support. But this friend was too extreme, idolizing others and did not accept that VOV talked about Ms. Hang, so she attacked 2 times a denial of service (DDOS) attack on vov.vn website, each attack lasted 5 times. second.

In addition, this friend also attacked the website of Vinh Long Province Radio and Television Station. Thought I would not be discovered, but cause and effect retribution, on November 17, this friend was carried to the ward and donated to the state treasury of 7.5 million dong.

The letter of the guy IT

The above incident is a wake-up call for the extremist young people in today’s cyberspace. If it was a few years ago, you probably would have been fine, but since the Law on Cybersecurity was enacted, you need to think carefully about your actions. Because we are Vietnamese citizens, living and working in Vietnam, we must also obey the laws of our country. The Cybersecurity Law also clearly states what acts are called cyberattacks. 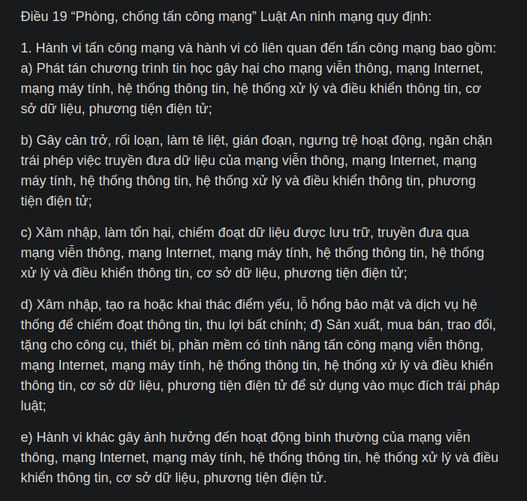 This case reminds me of when I was in high school. At that time, I also knew about IT for a long time. My first contact with Information Technology was in 8th grade. Given the curious nature of young people who have not experienced life, I dabbled a bit in the school newsroom.

Due to being part of the team, he was also exposed to the newsroom more than usual, accidentally learning that the newsroom’s LAN system was connected directly to the computers in the teacher’s room and the principal’s office.

After a few days of collecting information, I know the account password of the admin machine. Thus, it is possible to access all machines in the LAN system. Now what do you think you will do? Find exam questions, fix scores, install keyloggers, or viruses? If not, that’s normal, at that time I wrote a software that spread over the LAN to freeze the computer at startup and force the teacher to solve the homework to open the computer, something like the Hades I had. wrote earlier.

Because at that time, he had not experienced life, so he still did not know how to erase traces, less than a day later, he believed that he did. But because I’m on the team, I didn’t tell others. If I was known at that time, I don’t know what I would do.

Still young, who has never wanted to prove themselves. However, sometimes we can’t see the serious consequences of our actions, so it’s also very foolish. Like the young man above, where can 16 years old get 7.5 million? At that time, the person affected is our family, and you also get a brick in the profile. A moment of glory, but a failure of a lifetime.

What is the cost of a cyber attack?

Do you remember the Government Website DDOS case, it only took 5 seconds, but it cost a lot of money up to 3 years in prison. Then, the student hack into the Ministry of Education’s Website, changing the Minister’s photo to someone else. And most recently, the youth changed the website interface of Tan Son Nhat airport.

Then what do they get? Be famous for the whole country and embarrassed with family and friends. After serving the sentence, he did not show any talent at all. Because those are Kidde Scripts, find “step by step” tutorials online and follow them, not super talented. After that, the resume has 1 more stain.

My original purpose of creating Anonyviet was to share knowledge with everyone. A place where we can all absorb, learn more experience and skills.

Anonyviet is basically a provider of knowledge, and for what purpose you use that knowledge, you have to be responsible for yourself and society. NSDo not take advantage of knowledge to express yourself or perform illegal acts.

In each sensitive article, instructions for sharing methods and tools for pentesting / system testing, I have a warning about the misuse of knowledge and also emphasize that you must be responsible before the law. .

Attention! Only perform the DDOS Test on your Website or Server. Any act of DDOS entering the Website of another person or organization is against the law.

Be a White Hat not a Script Kiddie!

So, let Anonyviet be a place to share knowledge and grow with you on your own journey. Don’t make this a place for you to take advantage of to do bad things.